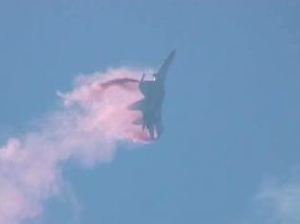 The red smoke coming from the wingtips is only there to demonstrate to spectators on the ground the direction the plane is actually moving through the air. Normally the smoke wouldn’t be there. When the smoke is streaming behind, the airplane is moving fast forward. When the airplane is engulfed in smoke, it means the airplane is almost stopped in mid-air. The maneuverability of this plane is incredible. This plane would be nearly impossible to defeat in a dogfight.

Russia now has #1 fighter plane in the world… SU-30-Vectored Thrust with Canards. As you watch this airplane, look at the canards moving along side of, and just below the canopy rail. The “canards” are the small wings forward of the main wings. The smoke and contrails provide a sense of the actual flight path, sometimes in reverse direction.

This video is of an in-flight demonstration flown by the Russian’s-30MK fighter aircraft. You will not believe what you are about to see. The fighter can stall from high speed, stopping forward motion in seconds. (full stall). Then it demonstrates an ability to descend tail first without causing a compressor stall. It can also recover from a flat spin in less than a minute. These maneuvering capabilities don’t exist in any other aircraft in the world today.

We don’t know which nations will soon be flying the SU-30MK.