Mike Tisdale our resident expert on all matters train related brought this to my attention. He said: ‘Churchill is one of the few people to have a funeral train pulled by a locomotive named for the deceased.  A4 Dwight D. Eisenhower was in the U.S. when Ike’s funeral train ran, but it was not in operable condition.’ Thank YOU, as ever, Mike.

Some more GOOD, representative pictures I managed to find on the Web (with me typically linking to the published URL rather than reproducing it AGAIN). 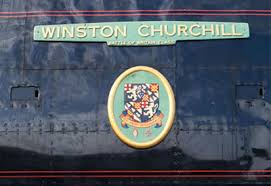